I’ve been spending the last year or so playing with the Intel Arduino products – Namely the Intel Galileo and the Intel Edison. One of my projects the last few months has been Making a LinuxFromScratch Linux Kernel with full build tools, Xwindows, and QEMU running WinXP SP3. Included in this build is a XWindows software FrameBuffer w/ VNC capability; that way I can run a networked gui and do some GUI type work.

The Edison is cool because it’s just powerful enough to run WinXP under QEMU without any software emulation. While I wouldn’t call the Edision a speed demon – it should be good enough to allow printer drivers to function. The onboard storage for the Edison isn’t really big enough to run WinXP from the eMMC flash; so I opted to run a SSD attached to the USB2.0 port of the Edison. Edison runs as the “master”. The end goal of providing “always on” scanner and printer driver capabilities for my old HP all-in-one color laser and the ULS-25E laser cutter.

I also wanted to run a rotational drive .. to act as a swap space for both Linux and for the Winblows PageTable. To do this; I built a Microdrive FLEX to 44pin 2.5″ IDE adapter board and attached it to the Edison via a usb->ATA adapter. I verified all of this works with a usb hub.

With the concept proven; I set about generating a Intel Edison USB Storage Sled. This PCB provides power to the Edision and then connects up a 4port USB hub. This hub then serves the USB->SATA->mPCIe->Intel SSD, a USB->PATA->flexIDE Microdrive, and an extra device port. I set about putting the Sled in a SparkFun Edison Block compatible form factor early in the design phase. Clearly this much stuff on one board prevents me from adhering to the tiny formfactor; so I grew it in the X direction to 4.5″ wide and about 2.1″ tall. This board provides all the power to run the SSD and PATA interfaces. The board is 4 layers; due to USB2.0 routing requirements / impedance matching.

Why the Sparkfun Edison Block formfactor? Well simply put; I wanted to be able to expand the “system” with more features I don’t forsee at the moment. Example: I do not currently need an SDIO card on my Sled – honestly; I’m lazy and don’t want to route the pins. But; if later I need it – I can just buy Sparkfun’s Block and add it to the system.

I’m requesting comments / suggestions / peer reviews for the design; as a result I’m posting it here. The first 3pages of schematics are Licensed to you as Derivative works of Intel and Sparkfun. The last 3 pages and the PCB Layout are currently ALL RIGHTS RESERVED Copyright 2015 by John Zitterkopf. ATM; I’m thinking I’d release the final design under a TAPR/NCL license… but I haven’t committed to that yet.

In addition to the features above; I’ve designed in some USB Muxes to aid switching the Edison into Device or Host mode (similar to the Intel Edison Arduino board). I’ve also included the Lipo Battery charging circuit to provide a limited UPS type capability to the design incase of small power outages due to lightning or what not. Lastly; I added an I2C eeprom which can be programmed by the Edison for the USB to SATA bridge chip.

Here are some pictures of the finished prototype: 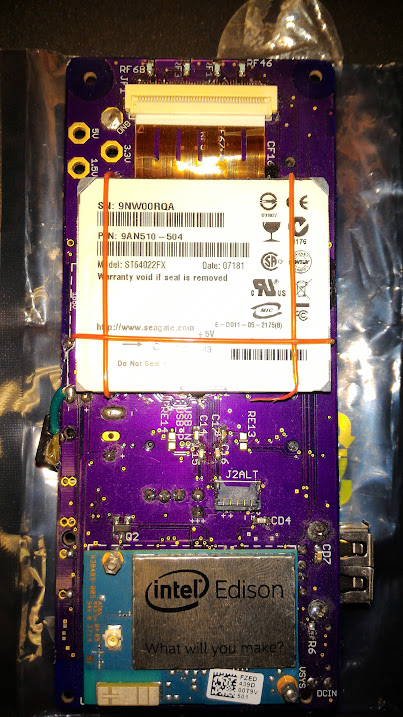 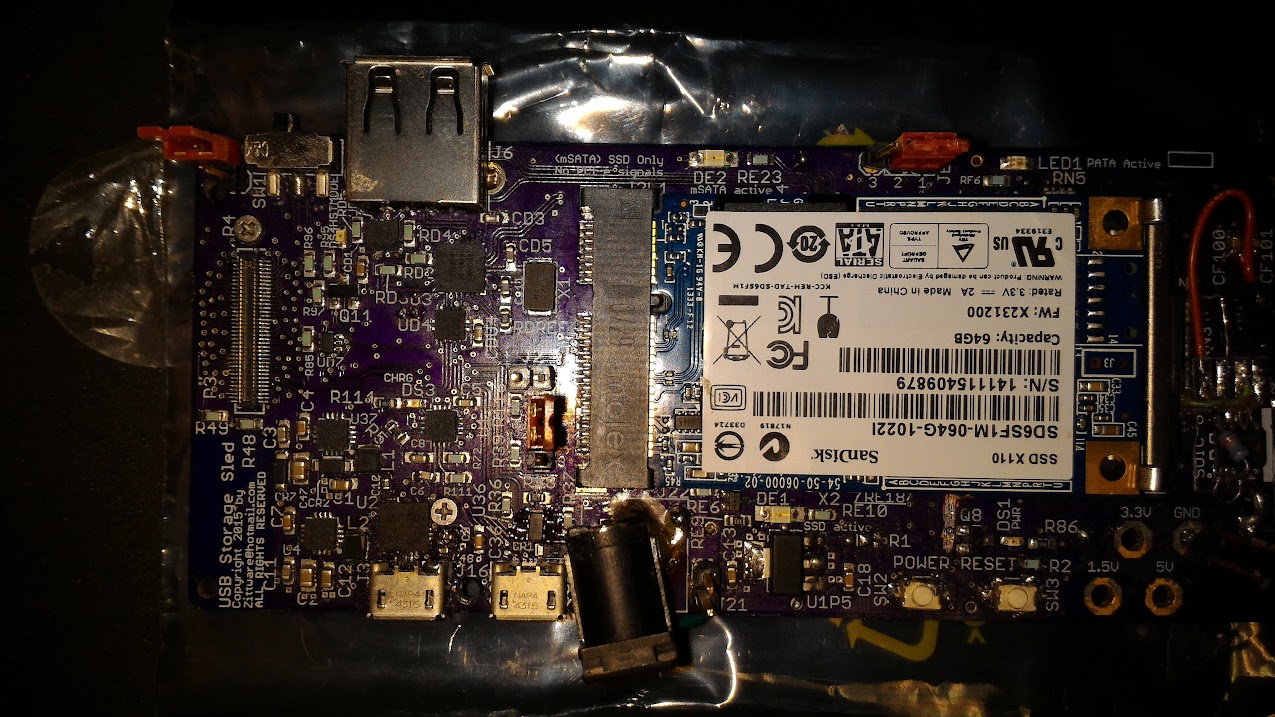 Feel free to leave a comment here (which will be reviewed by a human prior to posting) or provide comments in the various threads / project logs below: